…So let,’s see, when I last left off, I’d made it through the first four days of UI13, watched the Phillies clinch a spot in the World Series, packed my luggage and carry-on bag, and was heading to bed at 2AM on Thursday morning.

That nap lasted until 2:45, when a loud noise and a voice in my room woke me up suddenly. The noise was alarm-like and the voice was coming from a speaker in the wall. Now, we’re talking 2:45 am here, so when I tell you that the pleasant voice explained that the emergency alarm system had been activated, note that I’m paraphrasing. As close as I can remember, it (she?) said that the alarm had been activated, and if this message is followed by the sound of an alarm, we should evacuate our floor immediately. Otherwise, we were to stay in our rooms and await further instructions.

I’m the daughter of one firefighter and sister to another. I’ve got a pretty good idea that these folks have their system down to a science, but it’s 2:45 am. I got up. I paced the room for a few minutes while the voice pleasantly repeated its annoucement two or three more times and then went silent. Just to be extra cautious, I got dressed in the clothes I’d laid out for the next morning anyway. And then I waited. I paced between the window that showed just glimpses of firetruck lights bouncing off the building facade and the door I couldn’t decide to go through.

I picked up the phone to call the front desk to see if they had any insights, because that message just didn’t seem to be penetrating my skull very well. If I heard the message, was that the alarm? Or was the alarm supposed to sound like something else? And how would I know what the alarm was supposed to sound like? The phone rang about eight times, and then the wall let out a loud whooping noise.

That was enough for me. I slammed the phone down, grabbed my carry-on full of geek gear (laptop, phone, gameboy, etc.), threw it onto my back, and headed for the door.

As an aside, it’s worth noting that even at 2:45 am the things I’d been taught all my life were in the forefront of my mind. I knew I’d had time to get dressed because the many mattress fires at Gaige Hall had taught me that if you don’t smell smoke or see the fire, you probably have time to get dressed. I’d also checked the temperature of the door before touching the doorknob or opening the door into the hall, where the fire alarm lights were flickering happily but no one else appeared to be moving.

If the announcement about the drill wasn’t a funny enough WTF to deal with at a usability and information architecture type conference, the sign at the bottom of the stairwell made sure to top it. I wish I had a picture so I wasn’t once again paraphrasing, but to the best of my memory it said, “If you were evacuated from your floor due to an emergency, go outside using the door to the right. If your floor wasn’t evacuated, use the door to the left to go to the lobby.”

Having not seen any smoke or fire and really having no damn clue where the fire was, I opted for the lobby. There were at least 50 people already there, and many more straggling in. A glance at the window revealed that even more of us had opted for the “outside” door. Everyone was exhausted but no one was angry or mean-spirited. We just wanted to know if our stuff was on fire.

It wasn’t. A smoke alarm on the 3rd floor was malfunctioning and setting off the alarm, and the only folks with the ability to reset it were the local fire officials. Now at first glance that might sound stupid, but, well, it keeps the hotel owners honest — they can’t just wish away a fire and shut the alarm off.

We sat in the lobby for probably close to a half hour if you include the time it took for the elevators to be reset and for an entire 26-floor hotel to pile into those elevators to go back to their rooms. Unfortunately, I was totally high on adrenaline at that point, so I didn’t get to sleep until close to 5.

The alarm went off at the bright and early hour of 7:30 am, but i slept in until 8 before crawling my way back downstairs for the end of the sessions. Rather than drag out the rest of this post with details from the end of the conference, I’ll say this: the speakers were awesome, and if my plane hadn’t been scheduled for a 4:30 flight I would have definitely stayed for the entire day’s presentations. 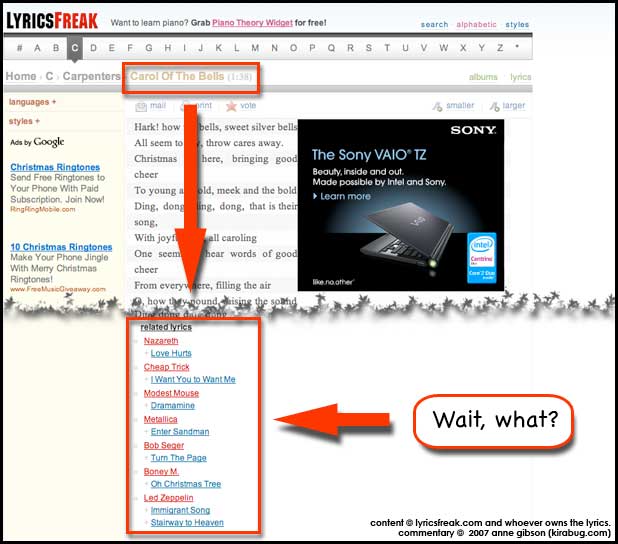 Google has been Elmer Fudd-isized. WTF?

Welcome to Spring in Pennsylvania.

What is TNG: A Night at the Roddenberry is, well, frightening. Might have to go into my list of bad music sites though.