Nighthawk flips back to the Flyers game during a Phillies commercial break. The Bruins immediately score.

Kirabug: Would you knock that off?
Nighthawk: It was a commercial!

Nighthawk switches back to the Phillies.
Kirabug’s iPhone chirps.

Kirabug: Aaaand, as soon as you change it, Meszaros scores. We really can’t watch the game if we want the Flyers to have a chance.

Phillies announcers mention that Raul Ibanez was hitless for 13 games, and since yesterday is 4-for-5.

Nighthawk flips back to the Flyers game during a Phillies commercial break.

Kirabug: Are you trying to make the score worse?
Nighthawk: They’re not going to score just because I change the channel, despite what you and half the planet believe about sports.
Kirabug: I don’t believe that.
Nighthawk: Relax, they’re in intermission.
Kirabug: You watch, the Bruins will find a way to score during intermission because of you. And I am not going to be the one to explain that to Tim Panaccio when it happens.

Nighthawk returns from walking the dogs.

Nighthawk: How did we load the bases.
Kirabug (half-asleep): Umm…the guy. In the uniform? With the bat? He hit the ball.
Nighthawk: Schneider?
Kirabug: Yeah. His second hit of the game.
Nighthawk: You don’t know who hit, but you know how well they batted this game?
Kirabug: What? Don’t judge me.

Roy Halladay just pitched a no-hitter in the first game of the National League Division Series.

A no-hitter. Only the 2nd one in postseason history. His 2nd no-hitter this year.

My brother, sister, & I all celebrated together on Twitter. Not to be outdone, Mom called all of us. Yeah, that’s right. Some parents call their kids for major holidays. My parents call me for the playoffs.

Or in this case, major Hallidays.

Thank you, Phillies, for a wonderful evening.

Had a great idea for a comic earlier this weekend but the time I was going to spend on it got eaten by WordPress updates, plugin updates, and an argument with a server over what version of PHP I was running.

Meanwhile, also got the house cleaned up, the closets cleaned out, lots of errands run, watched the Phillies win and then lose and then win, watched the Eagles fall on their face, threw the squeaky pig and/or the ball for Kaylee ten thousand times, took two walks for a total of 3 miles, and went to see Scott Pilgrim.

Look, if you’ve ever liked comics, comic strips, video games, being 17-23, bad bands, or strangely-choreographed martial-arts-like fighting, and you haven’t seen Scott Pilgrim vs the World get thine ass to the thea-tah before it clears out and you have to wait for video, because it ROCKS.

You also owe it to yourself to read the books. Now. Now now now now now. Look, even Nighthawk liked them. Go go go.

This coming week consists of much insanity as Nighthawk and I prep for our holy-crap-it’s-September-where’d-the-summer-go vacation in Virginia Beach, which commences Saturday. Maybe while I’m lounging by the beach I’ll get off my ass and draw some comics.

If you haven’t seen the first two-part episode of Stargate Universe and you are at all a sci/fi tv fan, you have roughly a day (if you’re lucky) to go watch it on Hulu. Get going!.

Now, that being said…

The week we moved into our first apartment, Nighthawk and I bought our bed, a dining room set, a recliner, and a sofa. That sofa was in pure sofa hell for quite a while, between JessieDog’s accidents, the puppies attempts to gut it, their accidents, spilled food, and any other number of messes. You’ll all be glad to know that the old sofa was sent out to pasture today, and we’ve got a brand new sofa-and-chaise sectional thingie in its place. For the first time in probably 5 years, I can invite people over and not cringe when offering them a seat.

Add to that the new TV and the new entertainment center, and this place looks like a whole new livingroom.

Totally unrelated, it’s National Novel Writing Month and we’re 5 days in. I have written zero words. I could give you many excuses, such as:

But the fact of the matter is that my creation energy is about tapped. I’m working on a huge project at work right now, and at least three to four hours of any (good) day consists of creating screens, justifying the elements within them, understanding how they work, and documenting them, and damn if that isn’t one of the most draining activities I’ve come across in a long time. It really does feel quite a bit like writing a novel. There’s the initial creation, the revision, the feedback, the more revision, the recognition that something that was an initial premise is horribly flawed and half of everything has to be ripped out and recreated, the desire to research, research, research, the recognition that the research alone could eat you alive, and an ever-present deadline.

Though I don’t spend quite as much time when I’m writing making Visio cry. Apparently that damned app gets grouchy once you cross the 50-page mark, regardless of how tightly you’ve grouped or limited your images.

I’ve also got knitting to do, a comic to work on, and general life to keep up on. Would like to go drown some worms with Dad this weekend (that’s “fishing” for the uninitiated), play some Katamari Forever, and maybe kill some sims. Or maybe just lounge on this bigass couch with my dogs. 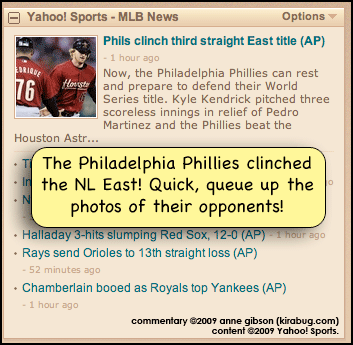 I have an absolute killer headache. It’s been around since noon. Not fun.

The most recent A Girl & Her Fed got me giggling though… third-tier villains shouldn’t be adopted unless you’re really going to take care of them.

And I’m working on comics.

Meanwhile, here’s some stuff from the internet:

You are being shagged by a rare parrot!

I’ve never listened to a Phillies game where Harry Kalas wasn’t announcing, unless it was his day off. He’s spent more time in my living room than a lot of my extended family. He was real.

We hurt. All of Philadelphia baseball hurts.

Goodnight, Harry, and thank you.