Sleepyti.me is hands-down the most useful site I’ve discovered on the web this week.

The top 10 daily consequences of having evolved include hiccups, wisdom teeth, and mitochondria.

Gamification and its discontents is a look at how this idea of making everything into a game is off-kilter.

The 30 freakiest ads of 2010 has some funny, some NSFW, and some very thought-provoking advertisements. Nighthawk and I think #21 should be somewhere in the top 5, but all will definitely catch your eye.

Help, My Half-Elf Is Pregnant! The 11 Strangest Questions From The D&D ‘Sage Advice’ Column

My two favorite Hyperbole and a half columns: Dogs don’t understand basic concepts like moving and This is why I’ll never be an adult have lots and lots and lots in common with me.

The world is trying to shake me at my roots, and I’ve been resisting.

I read an article years ago called The Sex & Cash Theory which says, in short, that if you want to be happy with your life you have to balance the things that pay the bills against the sexy, creative stuff. If you let your life swing one way or the other too far, chaos will ensue.

I’ve never had the problem of letting my life swing too far into the creative endeavors.

I get up, take care of the dogs, go to work, try to solve problems and occasionally create things that are useful. I sometimes feel like I’m genuinely making things better. Whether I succeed or not, it’s exhausting work of juggling competing priorities, competing egos, varying interpretations, and menacing deadlines.

When I’m done working, I come home, take care of the dogs if Nighthawk hasn’t beaten me to it (some days run, well, loooong….), source and prepare some sort of foodlike objects, and try to find something that will take my mind off of the work I left and the work I’m going back to the next day.

If I’m lucky, I get six hours of sleep. If I’m really lucky, it’s not filled with nightmares about work. Then it starts over.

(As an aside, have you ever tried to type around a dog? Chance says hello.)

Even as little as two years ago, I had the energy and drive to create after work. I drew a comic. I worked on the five novels I’ve got written in various pieces around my hard drive. I knit. I cooked crazy-ass things. (I’m pretty sure the peanutbutter fish story has never actually made it into this iteration of the blog. Someone remind me someday…)

Slowly I’m coming to the conclusion that I’m not where I’m supposed to be, mentally, physically, or emotionally.

Nighthawk’s health has recently provided me with an extremely large burst of nervous energy. On May 12th he’s having oral surgery, but not like the nice friendly “let’s pull a tooth” surgery. More like the “let’s put the lung patient on a respirator, do all the work, take you off the respirator, and give you soft foods for at least a week while trying to keep your calorie count above 3000/day and your blood sugar normal” oral surgery. Not. My. Favorite. Kind.

What do you do with a nervous breakdown on the edge of your peripheral vision? Well, if you don’t have a creative outlet for it, you take it to work and try to get it to be useful. This is somewhat akin to putting a bellman’s uniform on the most violent rabid dog you can find, and chaining him up outside your cube, where he’s in charge of greeting everyone. Not necessarily successful, and generally requires a mop.

The universe has decided to combat this insanity by making April into “Kirabug reassesses her values” month.

The first shake-up came from the conference at the beginning of April. An Event Apart re-fired my desire to create, but not my ability to find an outlet. The inspiration-with-no-outlet problem made everything else worse.

The next shake-up came as a Studio Ghibli movie watched on my iPhone while I was feeling burnt out and sick and tired. Whisper of the Heart reminded me that creation is hard work, and you don’t get better from hiding from it.

When I started writing the thyroid cancer part of the comic, which Christ knows I’d never intended to write back in 2004 when I started the comic, it got hard. No, let me reword that. It got haaaaaaard. I lost the enjoyment of the craft because I was frustrated at my lack of skill. And I lost focus when a new sexy toy (martial arts) caught my attention.

But creating stories is what I was born to do. I create stories in the shower, on the way to work, in the comic. Some of my best web design was expressed in a comic strip, not a wireframe. New ideas are literally scrawled in every file and on every note of every piece of paper I get my hands on. I haven’t stopped creating stories, just because I lost time and motivation. I just started drowning them out in news feeds and bad TV and RSS feeds and comic strips and timewasters.

(By the way, Whisper of the Heart is my new favorite movie. It requires two things: one, that you remember how it felt to be sixteen. Two, that you forget how it feels to be your current age. If you get those two reversed you’ll think it’s horribly corny.)

So I threw out a bunch of distractions. I cut from 78 webcomics to comics folder to 36 core stories I’ve been following for years and still love. I threw out all but 15 RSS feeds (down from 50-ish.) Repeat ad nauseum through Twitter and Fark and Facebook ad nauseum.

Progress. Still, I felt lost, like I’m not sure what I’m creating for.

But tonight Nighthawk and I watched Train (or How I Dumped Electricity and Learned to Love Design. Now, Nighthawk turned me on to Brenda’s twitter feed months ago. He happens to know that I’ve wanted to write RPG video games ever since I discovered Final Fantasy in high school. And game design is a bit of a passion for him as well.

I have neglected the pruning. The grass has overrun the garden, and the important branches have been left to wither.

I need to walk away from martial arts. It’s a great experience I will return to, but I can’t fit martial arts, work, and my home life all in the same jar. I certainly can’t do all those things and add any other form of creativity into the jar.

I need to leave work at work.

I need to reconnect with my characters and find out what they have to say, before I forget how to speak their language.

I need to give this nervous energy someone to chase that doesn’t wear a tie. Figments of my imagination are suitable candidates.

I need to listen to the earth, stop resisting who I am and what I do. At least for a little while.

I’ve managed all three in the last 48 hours, so I’m going to bed early tonight. Well, if you consider 10:30 early.

I’d rather be blogging about my awesome class last weekend, scanning the comics I drew during said class, or even just playing a video game, but my brain has already checked out and it’s pretty clear my body should follow.

But soon! Soon, I swear, I shall blog and comic again.

It’s been a very busy but very good weekend, filled with family and football and organizing the house, puppies and snow and Outback Steakhouse.

There are a lot of things I could be fussing over – the project I’m on at work, the lack of training the two mutts have gotten & how they’re going to tear the house apart again tomorrow, the fact that all my drawing sucks lately…

But instead, I’m curled up with my head on my husband’s chest, his arms around me, and I listen to him breathe, and I think, “I hope River Tam is OK.”

Yes, River, from the TV show Firefly. At the end of Serenity, everything had been turned upside down. I found myself wondering who was still after River, and re-running all the events of the series in my head to see if she had the tools to cope. Is she OK? What’s happened?

It may be worth noting that I have watched neither Firefly nor Serenity in at least 6 months, and I haven’t even been listening to the soundtrack. There is no good, logical, or relevant reason to be worrying about the fate of someone else’s fictional characters at 11:30 pm when I should be sleeping.

So now I’m lying here trying to clear my head in hope that the sandman arrives soon, and he doesn’t bring any other fictional guests with him. 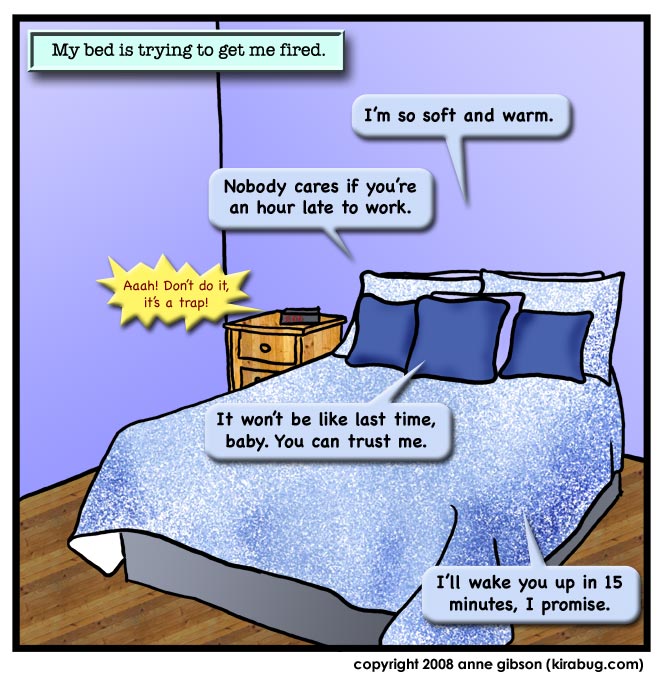 I created two Twitter feeds for the puppies — @chancedog and @kayleedog — so I can express their personalities without clogging this site.

I have a backlog of links I want to link to that I probably won’t get a chance to look at so go google “infinite blood supply” and somewhere in the news you should see an article on stem cells that’s pretty damn cool. I like it because it makes me feel a little less guilty that every time I’ve wanted to do the blood drives at work this year I’ve been coming down with something.

Can’t remember the other big article I’d wanted to post. If you go read the last 7 days of fark headlines you’ll see it somewhere though. Good luck.

Can barely keep my eyes open. Comic is done and all is right with the world. Time to sleep.