It was 12:30 in the afternoon. Time to walk the furballs.

We went outside into the front yard, where the dogs did roughly half their doggie business, and spend a little time whining at a cat at the other end of the clearing.

We walked a few yards down the sidewalk and then stepped into the grass between our condos and the neighbor’s house. There’s a large bush that separates the property. I don’t know what it is, but it doesn’t flower and it’s about eight feet tall. Plenty of cover for whatever wants to hide underneath it, which is why I generally keep the dogs away from it. (I don’t feel like untangling two terriers from a mess of branches when they spot a squirrel, which I’d spend every day doing if I gave them free reign over that bush.)

Chance was doing his usual sniffing thing, trying to find a spot that satisfies his exacting standards for what to poop on. Kaylee was rolling in the grass and I was doing my ridiculous “Come on Chance, focus” cheerleading routine for all the neighbors to see.

Chance turned toward the bush.

A full grown whitetail doe – easily 5 foot tall – bounded out of the bush, ran down the grass between condo buildings, and helped any drivers in our parking lot soil their pants.

All three of us stood there dumbfounded.

Now, terriers are a working breed, even if you get the shorties, which are a few generations into “lap dog” breeding. Hundreds of years of farmers have turned them into creatures whose brains are wired to find and kill vermin. I’ve never explicitly trained any of my 3 Jack Russells to hunt, but I’ve picked up dead and maimed toads, mice, and birds for nigh-on 10 years now. Whatever the creature, if they determine it’s not a human or a dog, when moves, they bite, spit it out, see if it moves again, bite, spit, etc.

You may think a deer isn’t vermin, but my friend, according to a Jack Russell’s definition, you would be wrong.

JessieDog’s reaction to deer back in the apartment was to immediately bay like a beagle and try to find a way off the balcony that didn’t involve falling to her death. But Chance and Kaylee have never seen a deer up close before, so I’m not particularly surprised that they had no idea how to react.

And then the smell of that deer blew back to us and small dog cogs and gears in small dog brains started turning. Just before the doe disappeared fully from view, my dogs’ little brains produced a spark that fired off some neurons announcing “OMG THAT’S THE BIGGEST RAT EVER!”

They started barking their fool heads off. Chance did leaps and twists and somersaults at the end of his leash in an attempt to chase the giant rat. I hauled them around the building forcibly, with both dogs pulling every direction, until we crossed the scent of that deer again. Then, suddenly, every blade of grass in the yard needed to be inspected and reinspected and re-reinspected for traces of deer.

Now, my training of my three dogs has never been 100% stellar. And I’m sure if I worked with them every day around deer I could eventually train these two to come when I call even if we’re surrounded by a herd of the World’s Biggest Rat.

But I’m also sure that, if my dogs had been off-leash today, they’d be lost or dead right now. You don’t train the hunt out of a terrier.

So Chance has been here about a week and a half, and he’s having a pretty good time I think. He’s not overly fond of being left home along, when he’s awake, but since he sleeps most of the day anyway we’ve got a pretty good truce going. (Friday he discovered an escape route under one of the baby gates, so it’s a tentative truce.)

One of the funnier things he does when he’s tired or stressed is pile all his toys in his bed. He was in a litter of two, but in a household with at least four adult dogs and three puppies from another litter, so I suspect this is an attempt to define his own space. It’s a totally understandable reaction, but hilarious to walk into the kitchen and find a perfectly clear floor, and a tiny tiny dog bed stuffed to the gills with eight toys and every puppy treat he’s been given that day. Usually he’s laying somewhere on top, fast asleep.

And we’re already seeing signs that we’ve got a smart one on our hands. He was upset that he couldn’t leave the kitchen the other day when we were home (he needed to pee and we needed a break) and he got tired of standing on the hard linoleum in front of the gate. He dragged his bed over to the gate and climbed in, then watched us through the gate with an expression very much like we were using to watch TV.

Two things that set Chance apart from JessieDog (because we can’t help but occasionally make comparisons between our “kids”): Jessie wouldn’t play fetch on a bet, but Chance loves it. Also, Jessie loved to be covered with the blankets but couldn’t figure out how to do it herself. Chance has already mastered both covering and uncovering himself, and was doing a good job of drying himself off after a shower this morning just by burrowing through the towel.

To make it official: that cute little boy that’s been appearing in random places on the site is coming home tomorrow. His name is unofficially Chance Benedict Gibson, though I’m sure he’s got some really cool name like Dog Branch Farm’s Chance or something to indicate the awesome breeder he comes from, so that’s how I labeled him in today’s comic.

He’s got a sister of sorts (no blood relation) named Kaylee who comes home in the middle of August. At least, according to plan.

Folks who hear we’re adopting two terrier puppies generally consider us insane. And we are, but not because of the terriers. In fact, the “shorties” we’re adopting are calmer and more companion-like than your standard Parson Russell Terrier. We’re almost 100% sure that lazybutt the wonder dog was a shortie, now that we’ve seen more of them, and not the potential terrier/beagle/dachshund/corgi mix that we were wildly speculating. She sure has the described temperament, and she’s got a lot in common with Chance’s mama.

The fact is, Jess was lonely when we weren’t here. We can’t work from home every day. A dog shouldn’t have to be alone all day any more than a kid should. So by adopting two terrors, we’ll at least be ensuring they have someone to play with when we’re not home.

And hey, we live in a condo, so it’s not like they’ll be wrecking a great piece of architecture.

I miss Jessie. I miss her more tonight than I probably have in a month or two. Stuff that was hers today will be someone else’s tomorrow. Boundaries are being broken. I’d give up the opportunity two adopt a hundred puppies just to have her back with us for a few more years.

It’s supposed to be hard and it’s supposed to hurt because if it was easy and it didn’t hurt I’d have to question just how much I loved her. That doesn’t mean it doesn’t suck.

But she’s still here, in our hearts and our photos and, well, right now her collar’s holding my drink…. And in the meantime, we’ve got enough room in those hearts and photo albums and the rest of our lives to accommodate two more furry children, so it’s time.

Neither of us has ever owned a male dog before, so this is bound to be interesting. We’ve got tons and tons of toys for him, and a whole variety of treats and stuff. It’s funny — the day we adopted Jess we woke up that morning, said “Hey, want to adopt a dog?”, drove to the SPCA, and had JessieDog home before dinnertime. This time we’ve literally spent months planning, and the entire last two weeks were dedicated to cleaning and reorganizing and shopping (oh the shopping) so that our little boy will have more going for him than the “Hey Dad, can I borrow a baby gate?” approach we took with Jess. Nighthawk has observed on multiple occasions that this feels like having a baby – albeit a much less expensive, already clothed, forever-two baby that doesn’t need a college fund.

And the double-bonus is that since we know we’re getting two pups we can buy ahead a little, so things should be even easier when Kaylee flies home in August.

Or so I say now…. we’ll see what I have to say as the next week or so passes.

I know it’s been a while since I cleaned, and even longer since I really gave the bedroom a good going-over. Since you died, I’ve been avoiding throwing out your bed, and that kind of turned me off of straightening the rest of the room.

But it’s been three and a half months and the bedroom was starting to smell so bad you wouldn’t have wanted to sleep there, and that’s saying something. So tonight, I finally cleaned that room.

And I just gotta point out, mutt, that with the proper enchanted implements I could have knit you back to life using the furballs you left under the bed. Have you found a way to shed from Heaven? 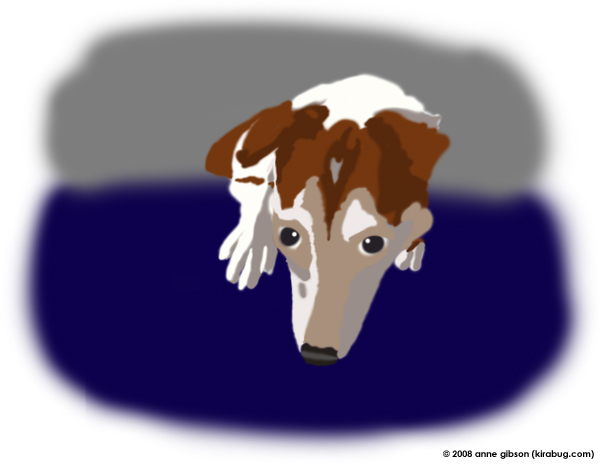 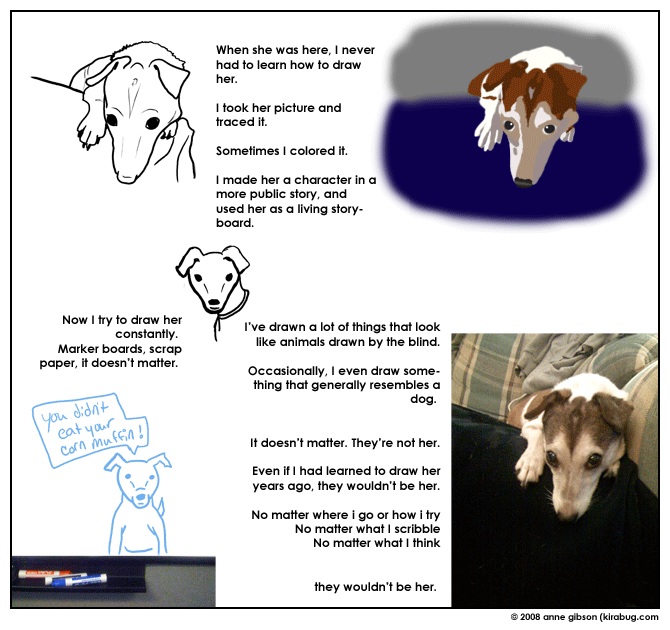 So incredibly tired. Started Tang Soo Do classes at work today, and the first class kicked my butt. My butt needed kicking. Wow am I exhausted. Wednesday there will be more butt-kicking. Sleep will be my friend.

On the creative end of things, I did finish the first panel of the Night Fugues comic that I started last October. But when the clock struck 11 I decided that I wasn’t going to get the other 3-4 panels done tonight and bailed out to a spare IOI comic I had in the wings. Sorry. We’ll get there. After all, I have to get through at least a chunk of this story or I can’t write about cornish game cows. Those are the rules.

I miss JessieDog. She and I could’ve crashed on the sofa together really easily tonight.