Today has not gone quite according to plan.

That late start was followed by a slight tiny 45-minute detour to Rehoboth Beach, because someone (me) missed the sign that said “Salisbury, Md This Way” and we stayed on Rt 1 too long.

We finally arrived at our hotel in Virginia Beach about 2 hours later than planned to discover that the only room in the hotel available is a 2nd floor handicap room right off the elevator, with a giant porch that has cigarette butts on it. We’d be thoroughly annoyed except a) we’re too tired to be more than slightly annoyed and b) we’ve been promised a high room off the elevators tomorrow.

It turns out there’s both a triathlon and an airshow in town, and if that wasn’t enough the hotel has a wedding filling the rest of the rooms. On Sunday, this place should clear out and we’ll have a lot more options available to us.

For now, though, I have a big patio and a view of the ocean, the weather’s beautiful, I’m here with my favorite person in the whole world, and there’s a Phillies game in a half hour. One I can watch on my iPad. Life? Life is pretty good.

My cousin and her wife are over from England, and they’re staying with our mutual aunt in Virginia Beach. So my sister and I drove down Thursday and we’re staung until Sunday. We’ve had a great time so far, eating and walking and drinking and talking and now, I am tired.

Tomorrow I still plan to have a comicup, but not in a “right at midnight” sort of way…. More in a “it’s supposed to rain tomorrow so what else would I have to do?” sort of way.

There’s a huge lump of Irish setter asleep at the foot of my sofa bed. I can’t get a reliable wireless connection, even having brought my own wireless router. Red, the setter, is useless for the networking but might be able to eat the housefly that has fallen in love with my laptop screen. I miss Nighthawk tremendously, and the puppies, but I’m recharging my “family” batteries.

We drove home from Virginia Beach yesterday, in fairly good weather and making fairly good time. When we finally reached the house, we found Houdini-Dog still in the kitchen where he belongs, for a change.

That was the good news. The bad news was that the only reason Chance was still in the kitchen was because the bathroom door had blocked his ability to pop the gate all the way out. So instead, he shredded the corner of the carpet he could now reach. Whee. Nothing like a 6 hour drive to come home to a pile of shredded carpet, carpet padding, dog toys, and poop.

So my first hour home consisted of mopping the floor. Joy.

Anyway, it didn’t take us long to get settled in — the house was mostly clean before we left and my sister left the place in pristine condition for us when we arrived home (sans Houdini’s attempts to escape via carpet burrowing, which she clearly couldn’t have predicted. Hell, she even unloaded the dishwasher for me.) so we mostly just need to catch up on laundry and the mail.

Sounds so simple when I say it that way, doesn’t it? How come it alway takes so much longer?

The other thing I need to do is transfer files off the laptop and onto the desktop so I can finish Tuesday’s comic, start Saturday’s, and generally get off my ass in getting my online life back in order. WordPress needs an upgrade, the Mac has a security patch to install, the laptop’s optical drive is dead, etc. etc. it never ends.

In an attempt to get off my ass a little faster, I threw out two thirds of the RSS feeds and comics I read just so they wouldn’t pose a distraction. I’ll probably throw out more as the next week or so goes. How well that will actually motivate me, I can’t say. But here’s for more blog and less late comics. 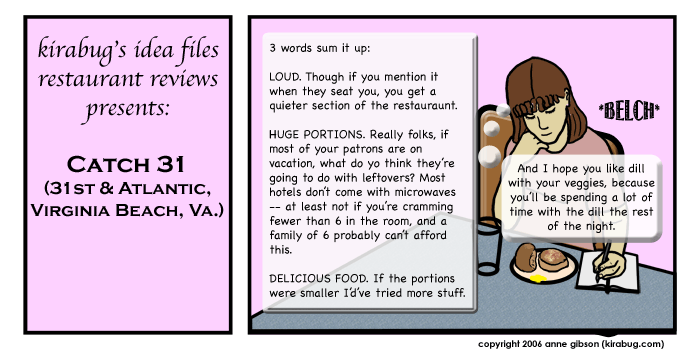 Mmmmmm, beach. I’ll comic tonight when I’ve had a chance to relax.

Kudos to Nighthawk for spotting this one.