As many of you know, I’m a Mac geek. I’m also overdue for a new computer. My iBook G4 is 4 years old next month. It’s already tolerated a RAM upgrade to 1.1GB and a hard drive upgrade from 40 to 120 GB. And I’m already pushing the limits of the capacity of this drive.

Since the iBook’s feeling its age, and since I’m an incorrigible multitasker (currently running 8 apps plus the Dashboard and OS and I just walked in the door) Nighthawk and I had struck a deal at the end of last year that if I was willing to forgo a vacation we’d get a new Mac this summer.

Well, summer grew to winter because I didn’t see the point in buying a new computer without also buying the new OS that was due out. so today, being Mac OS X 10.5 Leopard’s launch, we had a plan.

Like good geeks, we were in line by 5:30 (and it was an extensive line, at least 200 people) which meant I got a new teeshirt for being one of the first 500 in the store. It was fun to be there for something big. Apple reps were prowling the lines giving out water and giving us a rundown of the process.

I whipped out my list of hardware and software needed and said, “What if I know I want to buy this list?”

We were then bumped about 30 people ahead to the front of the line.

Once inside, we handed our list over to two very nice gentlemen who I think were relieved to see someone who knew what they wanted without argument. They filled the list relatively quickly, and in the meantime we stood around and watched the crowd. 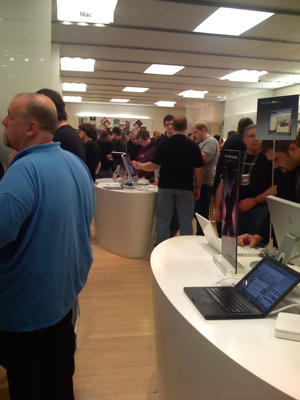 Considering that at 6pm we were still probably around #100 in line, the fact that we had everything I wanted (minus the Wacom tablet and the wireless mouse, both of which were out of stock) and were heading out the door by 7:10 was very very impressive.

I’m expecting the usual call from the credit card company (“Did you just spend a fortune at the mall?) any time now, but I might let Nighthawk answer it. I have one heck of a lot of setup to do so that I can start learning the new OS…. and I might want to eat dinner at some point too.

3 responses to “I Survived Leopard’s Launch”