Next Comics »
Next Sketchy Theater » 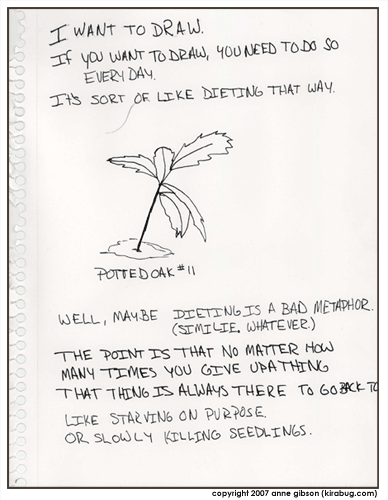 Sometimes you have to sit down and have a strict talk with yourself about expectations. I did that recently with the comic — decided it was OK for things to not always be so colorful and formatted and etc. etc. (I really look up to the artists who write, draw, color, and shade comics three times the size of mine every day. I don’t ever expect to get there, but I admire the ones that do.)

I also sat on the porch in the beautiful weather a few days ago and sketched, on real sketch paper, with real sharpies (my media of choice), and liked what I did.

So today – sketchy theater on the difficulty of drawing. Next comic: a paper version of Marin, threats included. After that: a much looser on-paper sketchy Night Fugues unlike anything I’ve produced yet… but hopefully still to your liking. After that? Who knows?