This weekend was supposed to be that quiet weekend that you take to yourself to relax and recover.

Saturday I spent most of the morning working on php for various websites including this one, and then we went out shopping. I got a new camera (more on that in the coming weeks I’m sure) which is almost embarassing in its power. Our old camera, a 2.1 megapixel that takes compact flash cards was bought as a Christmas present to each other in 2000 and cost us $500. I don’t even want to talk about what the 128MB card cost. It’s been incredibly reliable until about a year ago when the shutter button started to stick, and now it gets stuck autofocusing and you can burn through a set of 4 AA batteries in about 13 pictures. When I had tons of problems over vacation with it I knew it was time for a replacement. When I couldn’t even take pictures for some upcoming comics without fighting with it for a half hour about two weeks ago I knew it was time to put an end to that nonsense.

The new camera is a 7.1 megapixel camera that takes some damn small card thingie that’s a 512MB card that cost like $30, and the camera itself – an Olympus – is noticably smaller and lighter than the old one. It cost $150. I could cry. 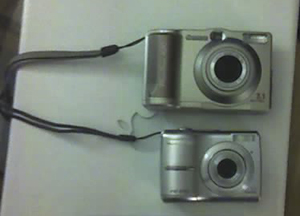 After buying the camera (and a bag of video games, mmmm video games) we went out to dinner with our friends Mike and Steen and little Juliana, who is just a doll. Stayed up way too late playing video games and then went to bed exhausted.

Got up late this morning and then worked on unimportant stuff, went food shopping, came home and put everything away in time to go to my parents’ for dinner (they had a roast beef that was too big for 4 people) and that’s when I tried out the new camera, which is awesome. Came home and did laundry, cleaned the kitchen, and prepared for work tomorrow and now it’s midnight and I’m typing this and I should be in bed.

Tomorrow: work and maybe some comic drawing, then maybe I’ll get to bed early too. Goodnight!

Last Thanksgiving I got it into my head that I wanted a fresh turkey, so we bought Bob. But we also had a coupon for a free turkey from the supermarket, and free food is free food, so we also picked up Ralph, a beautiful 16 lb Butterball frozen turkey, and threw him in the freezer.

Ralph has been monopolizing the freezer ever since, so last weekend after playing post-food-shopping-Tetris, I declared that Ralph’s time had come, and we stuck him in the fridge to defrost.

Ralph is currently roasting in my oven. Mmmmmm. I’m having turkey sandwiches all week :)

Which means I have about an hour to clean the whole house, because my sister, and Mike and Steen and the baby, are all coming over to dispose of Ralph.

Which means I’m really regretting that while trying to move the cactus a few minutes ago I dropped it.