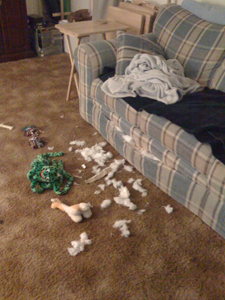 Cleaned up the stuffing and tried duct taping the couch closed. (DISCLAIMER: I didn’t want to duct tape the couch. I think duct tape on living room furniture looks trashy. I was talked into it as a temporary fix and it did get us from Friday to Sunday, but dude, do not duct tape the couch.) Mopped the pee off the kitchen floor for the third time this week, cleaned up some other stuff, did some chore-like things.

Saturday:
Played me some Civilization IV

most of the morning after getting up at 6ish with the terror twins.

Gave Chance a bath. He was less than thrilled and when all was said and done he voiced his opinion by peeing on the towel. Took Kaylee to get her lyme vaccine and discovered the back window of my car (which I previously learned no longer closes) now opens randomly when it feels like it.

Invited my brother and sister over for baseball, steak sandwiches, sushi, and Mario Party 8

, then hung out with my husband for a little while and went to bed.

Sunday:
Got up relatively late with the terror twins, since Nighthawk got up with them for the 6:00 pee break. Cleaned up the kitchen, cleaned up the livingroom a little, helped with the laundry. Gave Kaylee a bath. She cried and cried and cried and I’m pretty sure the neighbors think I was killing her, but she was so dirty that the water actually ran brown for the first 30 seconds or so as the mud washed off her paws. She didn’t pee on the towels at the end, but that was about the only break I got on that front.

Then, some retail therapy. Bought a swiffer wet jet so I won’t have to drag the whole mop/bucket combination in the house every time Kaylee decides the pee pads don’t really apply to her. Bought some dog supplies for vet trips and the like as well.

Also bought a staple gun. Half inch staples hold the couch’s gaping wounds closed much more successfully than duct tape. Planning to have new livingroom furniture by the holidays. Maybe sooner if I have to keep sleeping on the couch in the morning because the dogs are up stupid-early.

Got a bean bag chair for $20 from K-Mart. It’s no Sumo but if the dogs shred it I’m only out $20. And considering that it’s relatively small, it’s still billions of times more comfortable than the floor.

More on my K-Mart trip coming later this week in Life is Odd comics if I get to it.

Mopped the floor with the wet jet and it’s much easier than doing the whole mop/bucket dance. Helped with laundry, did a KFC run for dinner, did the food shopping, came home, and bought a new camera

, which ought to be here in a few days.

Now I’ve got a terror at my feet asleep and another terror in my lap who keeps resting her chin on the keyboard and typing (but “ttttt tttttttttttttttttttt” isn’t exactly riveting conversation so I’ve taken her opinion back out of this article at least three times now.) In a few seconds I’m taking them up to bed and then trying to get some sleep. Tomorrow is work, of course, so it’s back to the grind.