Psst – Dad! I’m adding links so you can watch them on Youtube directly

The Muppets do O Danny Boy

END_OF_DOCUMENT_TOKEN_TO_BE_REPLACED 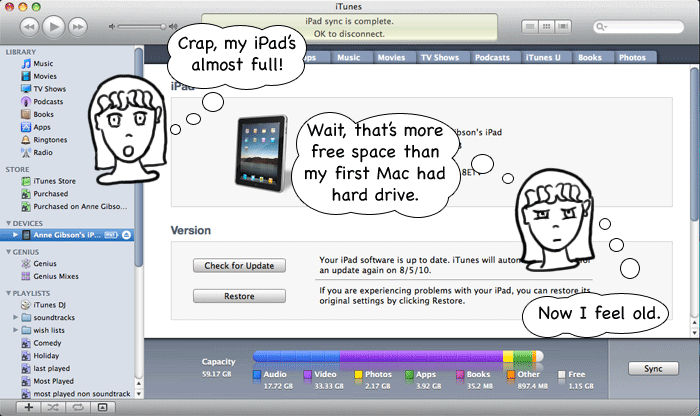 The optical drive on my iBook G4 is shot. That doesn’t render it unusable, but it does render it annoying.

So I went internet-hunting for a quote and discovered this nifty site. iFixit will not only sell you the parts (and tools) you need to fix your ailing out-of-warranty Mac hardware, but also provides guides for gutting said ailing Mac so you can install the part. Very niiiice. Especially considering how far I had to dig to find the guide the last time I needed to replace something.

On the other hand, Apple just quoted me $99 to replace the drive, and considering that the part is running at least that on most 3rd party websites and this includes labor, I’m tending toward that. I’m not sure the guy I was talking to really understood what I was asking though, because the price seems REALLY low. But $99 sure as heck beats not having a laptop.

My kid sister (basschica) managed to bathe her Macbook in iced tea Friday. As a result, we’re back at the Apple Store today.

Let me just say that the Genius Bar and the way they handle it is the most awesome support mechanism I’ve ever seen. But the kid just got called up, so I’ll post more later.

Well, it took the removal of at least 35 screws and most of the bottom half of my (already out-of-warranty) iBook Dread Pirate Roberts, but we replaced the original 40GB drive with a 120, and boy is she sweet. I’d already bumped her to 1.12 GB of RAM a few months ago, so she was cooking in the RAM department already. The only thing holding her back has been a distinct lack of space to use as a scratch disk — complicated and compounded by the fact that both Photoshop and Mac OS X will happily use the entire freaking drive as extra RAM for pageouts if they need to.

But now? Wow, my images actually open quickly, which means I can do things like finish the Nuclear weather rock print. It’s sweeeeet.

When you don’t have the right tools, drawing can be a really painful experience. But once you do, the inspiration flows like water.

Well, I knew it was going to happen eventually, but I was really trying to put it off a little longer than this.

See, this comic is brought to you by the power of a 2 year old iBook G4 with a 40 gig drive. When it was purchased, I thought this was the lap of luxury — it was an upgrade from a 2000-model Pismo (Powerbook G3) with a 20 gig drive. Forty gigabytes! That’s huge! My first Mac had a 512 megabyte drive! I could hold THE WORLD with 40 gigs!

Except that the world has suddenly become 7.5 GB of applications, 10 GB of music, and, shockingly, almost 10 GB of files in the Pictures directory. And of those 10 GB in the Pictures directly almost 7 GB is, well, the comic. There’s another 6+ gig of every other thing I need to survive (everything from finances to old poetry to, oh yeah, the backups of this website) and that leaves me at about 33 to 34 GB filled.

Since the drive only formats at 37 and a smidge, well, things have been tight.

So tight that every single time I try to draw a comic at this point, I’m maxing the hard drive. How maxed? Well, let’s just say I’m very very familiar with the error that says that the comic can’t be saved because we’re out of disk space.

So here’s where we sit. (The livingroom.) (Sorry. I couldn’t help it.) Nighthawk just spec’d out and ordered me a new 120GB laptop drive and an external enclosure for the old drive. But once it arrives (next week?) I’ll have to back up everthing to the server, then install the new drive, and then rebuild the laptop with the new drive.

But until then, well, the buffer is empty because it’s been so damn hard to draw comics with no hard drive space, and we’re really scroungy. Consider this an active solicitation for fan art. You send fanart, I post it. (Obviously within reason, I get to choose, blahblahblah.) Where to send it? How ’bout we go with fanart at kirabug dot com

As for tonight’s comic, I’m trying to throw something small together to get us through the night, but it’s after 11 now and we’ll see what happens. Whatever does show up will probably be late. I do have some standards.

Thanks for your patience and your support.