Thursday I found the living room and my desk. Now technically I have two desks – there’s the new computer desk, and there’s the old do-all-the-mail-and-stuff desk. The old desk was buried under a stack of paperwork about two feet high, prior to Thursday.

It took all day (and I mean ALL day) but I processed about six months of filing, including creating new empty files for 2008, cleaned my desks, took care of all the paperwork, and put away everything in the household financial category.

It also generated about three bags of trash and the breaking down of a ton of cardboard (Amazon is my friend, but the other side of Christmas usually looks like I’ve been running a warehouse), which was too bad because trash is usually picked on on Thursday at 6 AM. So everything I’ve processed since then has to sit out in the trash closet until Monday when they come again.

Yesterday Nighthawk wasn’t feeling well, so instead of continuing the decluttering, I played Final Fantasy XII for eight hours or so. I’m now about to break 160 hours, and and on my way down to the Feywood for the first plot-related time. I’m also around level 60. Yes, I’m doing way too much, and yes, you probably could have beat the game twice in the same amount of time. But I’m happy.

Yesterday evening my kid sister and her awesome boyfriend came over and picked up an old G3 450 Mac that we always said we were going to donate to a school but didn’t actually accomplish until after the schools said nothing lower than a G4 please, a PC case we’d never gotten around to using, about six or eight games, and an assortment of other oddball things that we didn’t need but that college students are always glad to take for free. As for me, I was just happy to get them out of my house.

After that, I went out for drinks and snacks and dessert with my friend Steen and we had a great girls’ night out over at Applebees, land of the half-price appetizers after 9pm. Their mini-desserts rock, too.

JessieDog wasn’t feeling well last night and wouldn’t settle down in the bedroom where my nice warm husband and nice soft bed are located. Around 4:30 I brought her downstairs and by 5:30 we were curled up together on the sofa fast asleep. I love the time I spend with her cuddling like that but would have loved it more if it hadn’t been on what’s rapidly becoming the sofa from hell.

Today I putzed around the house for a little while, and then decided that my back and knees weren’t going to recover from the sofa that rapidly, so I might as well wreck them further. I emptied every single cabinet in the kitchen including the food cabinets, and cleaned out the refrigerator. The entire first floor looked like a kitchen had exploded.

The thing about two people living in a house as compared to five, is that with five people there’s always someone who’s eventually desperate enough to eat food before it spoils. With two people, you buy something because it looked delicious at the time, but three days later it doesn’t sound as good or you get invited out instead or whatever. As time goes by, that food doesn’t necessarily leave (especially not dry goods) but it doesn’t get eaten either… and eventually you don’t have room for the new food you do eat, but there’s “nothing to eat” in the house either. That’s when it’s time to audit the fridge and cabinets, and that resulted in a bag of disgusting items exiting earlier today. (I’m pretty sure that Thanksgiving’s egg nog had reached the Bronze era of tool development.)

JessieDog managed tog get herself trapped in the maze of stuff four times during this process.

Once the food was put away I was able to weed through the equipment zoo and pull the duplicates — cake pans that had been replaced with new silicone, a coffee maker that had bit the dust, the foreman grill being replaced by the cuisinart grill, four basting brushes… That was the easy stuff.

Then I had the hard decisions to make. Do I really need four glass casserole dishes? Why keep a peanutbutter stirrer that I’d never use? How many coffee mugs are too many? Would Mom and Dad use these six bottles of spices that I accidentally bought twice faster than Nighthawk and I? Where’s the dog now?

Having put away the mass majority of the mess, I took a nice interlude to my folks’ place, where we enjoyed plum pudding and played killer bunnies with all the expansion decks for the first time. That rocked.

Then, returned home and put away the rest of the kitchen, took out the other two bags of trash (the trash men are going to have a coronary on monday), straightened up outside, boxed up six boxes (small ones) of the kitchen supplies I no longer need so they can go to my siblings and/or goodwill in the near future, hauled everything upstairs for storage, and finally sat down.

My house is as close to clean as it’s going to get for a good long time. And that’s good because my back and knees will kill me if I do much more than that.

It’s totally liberating, though, to be able to find the things I use. Most things didn’t move at all, but those that did were either moved to reachable locations, or disposed of altogether so I can reach things. I can find things. Things aren’t crushing other things. Every food item in the house is currently edible. I don’t have three bottles of cinnamon. The dog can find the floor. There are files for the filing, and there aren’t boxes stacked in front of the filing cabinets. All the computers are actually being used actively.

And having done all of that, I can enjoy the last three days of my weekend knowing that I’ll be going into the new year lighter and more ready to face the world.

After I sleep, that is. 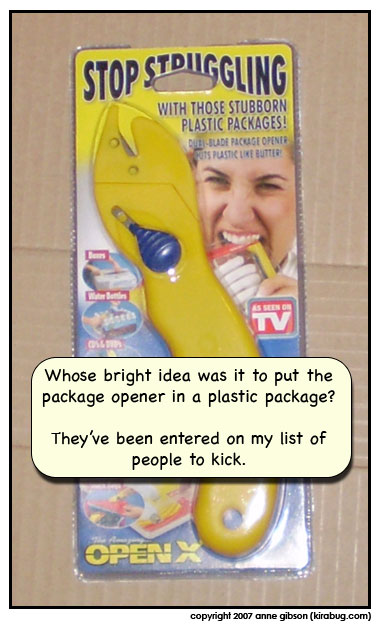 I’m blessed with many many years of my father not being able to handle the sight of clutter. While his anti-clutter rants drove me bonkers in high school (and got my room “shitcanned” by him on multiple occasions) it forced me to learn how to declutter. (Ironically, he taught me too well — as I got older he’d start going through the trash and questioning whether I really wanted to throw out stuff that he assumed had sentimental value to me — or four-inch long pencils. Man has a pencil problem.)

One of the interesting things about decluttering for me is that I’ve learned my triggers… which include Christmas in a big way.

The end sum is a bad case of “Where’d my livingroom go?”

Add to that the fact that I gained three (whoo!) new kitchen appliances this holiday season as well as an AWESOME set of new silicone baking stuff and there’s no room in the kitchen and I’ve got a decluttering problem to solve.

43 Folders has a great post up right now that a) covers what to do with all those books and b) gives links to a full series of posts on decluttering your space. I recommend it.

There’s not much more satisfying than starting the year with a clean house. 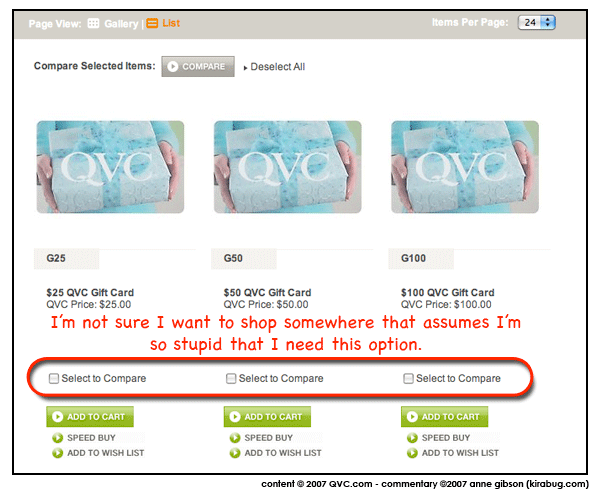 Their website was so badly designed that we could not convince the gift card to place itself in our cart. Land’s End won out rapidly after that. 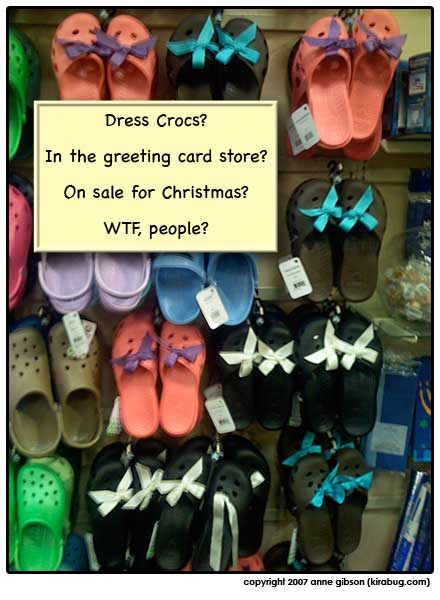 We’ve been last-minute wrappers for years. In this case, that meant wrapping Thursday night for me because I had gifts to take to work on Friday, and a family party yesterday. Nevertheless I’m sure some of you still haven’t started, and when you do you lament your wrapping skills.

I was lucky enough to be taught how to wrap gifts by my dad, who’s an awesome gift wrapper. He’s also managed to con my brother and little sister into doing most of his wrapping for him the last few years — which amazes me, since he’s so good at it.

Anyway, here’s a great article on Making Light on how to wrap a package.