So here’s a snapshot from my evening:

I’m trying to train Chance and Kaylee to go outside to do their business. They’re already housetrained in the sense that if I put training pads down in one of the two designated spots they’ve been trained to look, both dogs will reliably pee or poo on the pads.

But the pads aren’t exactly cheap, we’re guaranteed to use at least two a day in the kitchen while we’re at work, and once they’re used the house starts to smell like dog piss.

As an added bonus, all, let’s just say Chance’s aim is what you’d expect from a 1 year old boy. So I end up cleaning the rugs about once a week.

So Chance is dancing around the pee pads and his butt looks like it’s going to explode. I ask him if he wants to go outside, clip the leashes on both dogs, and we head out the door.

Kaylee pees right away, and gets a treat.

Chance sniffs. And sniffs. And eats some bird seed under the feeder. Wanders around at the edges of the neighbor’s yard until I call him back. Eats a leaf. Barks at (choose one:) the neighbor, the sound of a faraway train, a truck, Kaylee. Wanders. Sniffs. Bites his leash because it’s preventing him from causing more trouble. Eats a crocus.

Now, repeat the paragraph above for at least 30 minutes.

While he was doing that, Kaylee was doing all the same things, only not in the same order. Plus, occasinally she’d wander over and bite Chance’s ear or leg, just ’cause.

We came in when Chance decided to lay down on the lawn.

As soon as we came in, he headed straight for the pee pads. So I hauled him back outside. But one of my neighbors was smoking on his porch so there’s no way Chance was goingbto concentrate on the task at hand.

So back inside, where Chance decides to lay on my lap and stare at the chicken I was trying to use as a treat for pooping. He fell asleep there.

Now, he’s tucked himself into the sofa blankets and is chewing a nylabone.

This training thing is clearly going to take some time.

First, a quick late Happy Anniversary to ideaphile plantnerd and the Brit, and a quick early Happy Birthday to my dad, who I understand pops on here like, once every blue moon. I love you all!

Second, via peri-renna, two very excellent blog posts on what to do if you think someone important to you is dealing with depression here and here.

Peppermint iced tea, while delicious, makes you cold, so I really ought to stop drinking it in the winter.

Had fun watching the Super Bowl tonight. Pitchers and catchers report in 12 days, 9 hours, and 30 minutes.

I’ve now been staring at this screen for 5 solid minutes, so I think maybe I should go to bed. Goodnight! 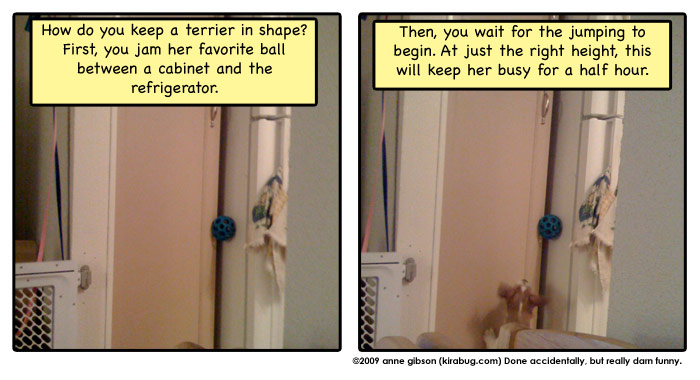